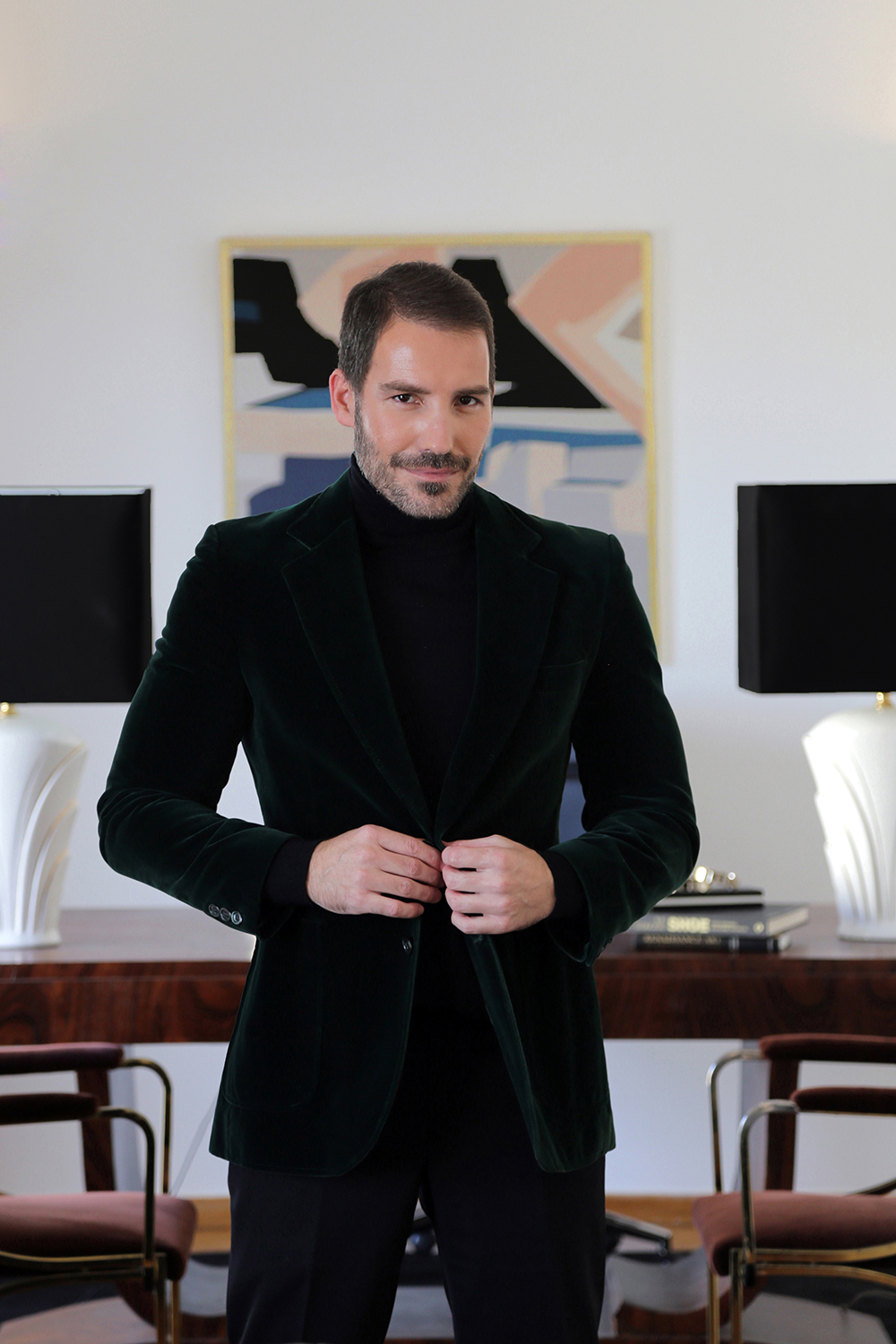 Doukas Chatzidoukas (known as DUKAS), established the eponymous brand in 2003. He created his first Shoes & Accessories collection which contained Prêt-à-Porter products with vivid Haute Couture elements. The same year DUKAS accepted an invitation from the ‘Camera Nazionale Della Moda Italiana’ to participate in ‘Alta Moda’, a week of Italian haute couture. VOGUE Italia publication characterised him as a ‘subversive fetishist’ newcomer talent. DUKAS items were instantly characterised as luxury and became extremely successful, as they were adored not only in Greece but also in Europe and America in upscale boutiques such as L’Eclaireur in Paris and Luisa Via Roma in Florence.

The following year ‘SWAROVSKI’ due to the Olympic Games of ATHENS 2004 assigned DUKAS the project to create an extremely subversive Haute Couture sandal made of leather, plexiglass and Swarovski crystal mesh (a material which contains crystals in the form of tessera) which presented the classic Greek motive of Meandros. The Olympic sandal, from 2004 until now, is being exhibited at the ‘International Swarovski Museum’ in Austria and bears the signature DUKAS Made in Hellas. Olympic Games medal winner Niki Xanthou was chosen to be the face of the advertising campaign for the Olympic sandal.

During the same year, popular Greek music station ‘MAD TV’ collaborated with DUKAS to design the award statue of the MAD Music Video Awards 2004. DUKAS continued designing successfully these awards for three consecutive years, up until 2006. 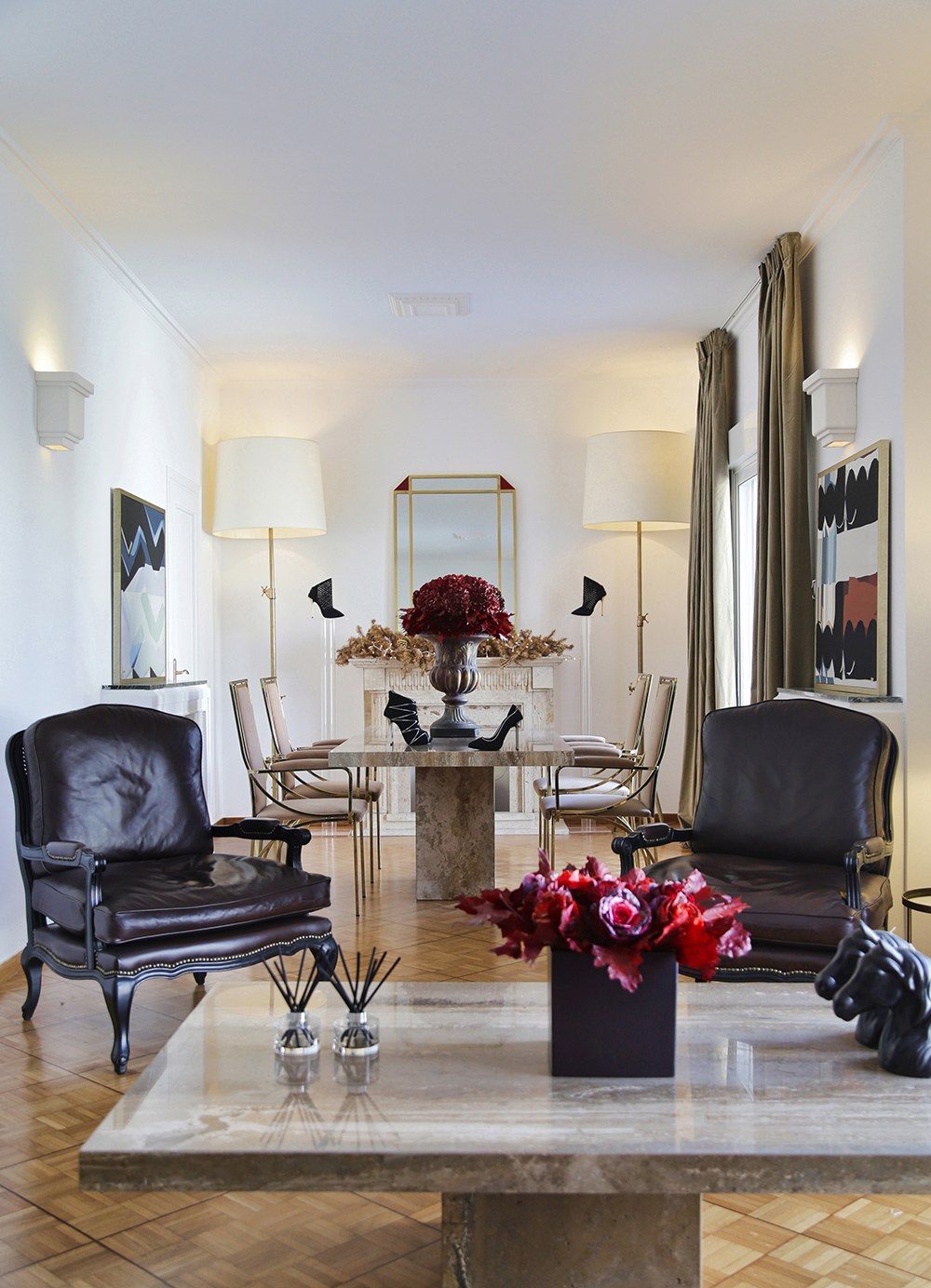 In 2005, DUKAS accepted a proposition from ESTEE LAUDER to create a unique accessory to reinforce the Fight Against Breast Cancer Campaign and raise money for breast cancer associations. That was the first time that ESTEE LAUDER started cooperating with a Greek designer and continued the partnership for the next 17 consecutive years. The Pink Ribbon bracelet has been designed by DUKAS, manufactured in Greece and bears the signature of ESTEE LAUDER and the Greek designer. DUKAS exclusive collaboration with ESTEE LAUDER and the annual creation of Pink Ribbon bracelet is an honor and a creative challenge for the designer, because it gives him the chance to contribute in his own, creative way to a very important charitable cause. The proceeds from the sale of the Pink Ribbon bracelet finance the humanitarian actions. ESTEE LAUDER is particularly proud of its contribution to the fight against breast cancer, as to date, more than 3000 free mammograms have been performed by the mobile mammographs throughout Greece.

In June 2011, EVELYN H. LAUDER, Senior Corporate Vice President of ESTEE LAUDER COMPANIES and International Ambassador Breast Cancer Awareness Campaign and the designer DUKAS, Greek Ambassador Breast Cancer Awareness Campaign met at the headquarters of ESTEE LAUDER COMPANIES in New York. After an invitation by EVELYN H. LAUDER, DUKAS had the opportunity to be given the grand tour of the headquarters of ESTEE LAUDER COMPANIES in New York by EVELYN H. LAUDER herself, as well as visit the premises of the “Evelyn H. Lauder Breast Center”, a non-profit center for the prevention, diagnose, treatment and rehabilitation of breast cancer patients, operating within the Memorial Sloan-Kettering Cancer Center. During their meeting they exchanged views and discussed their work and common goal. At the same time, DUKAS presented to EVELYN H. LAUDER the brand new Pink Ribbon bracelets and she congratulated him on the inspiration and design of the bracelets as well as on his dedication and constant contribution to the Breast Cancer Awareness Campaign. EVELYN H. LAUDER: “Remember, with each bracelet you design, human lives are saved… “this was the concluding phrase at the meeting of the two ambassadors.

DUKAS participates in ‘Paris Fashion Week’ since 2008; presenting his collections at multi brand showrooms continuing that way his international career, making DUKAS brand more popular all around the world. Celebrities such as Jennifer Lopez, Rihanna and Fergie among others have requested DUKAS designs for performances or photo shoots.

From the very beginning until now all DUKAS Collection products continue to bear the signature Exclusively Made in Hellas. The collections are hosted at selected outlets and big departments.

Be the first to know!

Can’t get enough? Sign up for our newsletter. Get your weekly fix of the latest updates, previews, and exclusives from DUKAS.

This website uses cookies to improve your experience while you navigate through the website. Out of these, the cookies that are categorized as necessary are stored on your browser as they are essential for the working of basic functionalities of the website. We also use third-party cookies that help us analyze and understand how you use this website. These cookies will be stored in your browser only with your consent. You also have the option to opt-out of these cookies. But opting out of some of these cookies may affect your browsing experience.
Necessary Always Enabled
Necessary cookies are absolutely essential for the website to function properly. This category only includes cookies that ensures basic functionalities and security features of the website. These cookies do not store any personal information.
Non-necessary
Any cookies that may not be particularly necessary for the website to function and is used specifically to collect user personal data via analytics, ads, other embedded contents are termed as non-necessary cookies. It is mandatory to procure user consent prior to running these cookies on your website.
SAVE & ACCEPT
Go to top
Close

Shopping Cart 0
No products in the cart.
Skip to content